Been sitting on this one for awhile…

David Denby’s essay in this week’s New Yorker tackles the “new” romantic comedy: the “slacker-striver romance.” This pop-culture staple of my adolescence and young adulthood tells the story of hot, ambitious chick falls for a witty, going-nowhere-fast dude. As both a young female filmmaker (these movies are almost always directed by males) and someone with a thing for slacker-boys, this topic is of particular interest to me. Why am I attracted to slackers? Why are the women in these movies always so lame?

To my disappointment, Kevin Smith was absent from the article. If I had to blame my slacker fetish on anyone, the award would definitely go to Brody from “Mallrats,” with Daria’s Trent is a close second. The 12 year old girl inside me still gets all excited just thinking about them. What a disappointment it was to discover, a couple years later, that not every (or perhaps any) video-game nerd converses in a constant stream of humorous but insightful one-liners. Nor are they as cute as Smith would lead one to believe. At least Trent was a bit less deceptive in that department; boys with guitars do tend to be hotter than average.

But its not just that I wanted to do these fictional slacker boys. While there was a definite sexual element to their appeal, more than anything I wanted to be friends with them. Its no contest: Bong rips are more fun than lip gloss. Girls got to pluck their eyebrows, guys got to tell dirty jokes. Girls did homework, guys formed bands.

Judd Apatow’s “Knocked Up” is the moment’s preeminent example of the slacker-striver rom-com. I thoroughly enjoyed “Knocked Up,” but it also upset me. Apatow is the creator of Freaks and Geeks, a show featuring one of television’s best female characters ever, in the form of a brainy girl who finds her place with a group of “burnouts”. Lindsay Weir is strong yet vulnerable, reluctantly both beautiful and badass. How could someone with the capacity to create such a nuanced and realistic teenage girl on a fucking television series make the heroine in their film so empty?

Sure, for an “E! Hollywood” reporter, Knocked Up’s Allison is remarkably down to earth, but that’s kinda like saying that for fast food, Wendy’s is surprisingly nutritious. As Denby writes, Allison “has a fine fit of hormonal rage, but, like the other heroines in the slacker-striver romances, she isn’t given an idea or a snappy remark or even a sharp perception.” Come on Judd, was getting your show canceled really that bad? That from now on the best we can hope for in regards to female leads are tasty-looking, manufactured, corporate babes who are celebrated for leaving one only mildly nauseated after consumption?

Sadly, things aren’t looking much better on the dude front. Its one thing for guys not to have their shit together in high school, even college. But Knocked Up’s Ben is such a loser that even I can’t build up the slightest desire for him. Is society doomed for perpetual middle school?

Maybe I should stop being so critical and just take “Knocked Up” for what most are lauding it as: a Hollywood movie that is both genuinely sweet and funny and doesn’t suck. After all, its just a movie. But there remains the issue of why, Ben aside, I’m still into slackers. And I’m gonna take a guess that I’m not the only one.

Why don’t we dig boys who have their act together? Is it some kind of perverse maternal urge, perhaps as a result of delayed childbearing in college girls? That coming of age in the shadow of the 90s means the slacker archetype will be forever imprinted on our libido? That Hilary Clinton is such a terrifying bitch, and that with all the pressure of school and a career and looking good, if we don’t date someone chill we’ll become one too? That ambition today is just so horribly revolting?

Maybe some better role models would help. Since the real world doesn’t seem to be too forthcoming, I turn to movies. Where is this decade’s “10 Things I Hate About You?” Directed by a man but written by two women, its characters of both genders are intelligent, unconventional, and sexy. For those of us growing up with it, it probably did for bisexuality what “Clerks” and “High Fidelity” did for slackers. 10 Things answers Denby’s plea for a romantic comedy where women “challenge the men intellectually and spiritually, rather than simply offering their bodies as a way of dragging the clods out of their adolescent stupor.” We need more of that.

PS. Speaking of slacker boys (who really aren’t), Logan’s got a new blog and Vince got published in McSweeny’s. Sweet!

PPS. What’s with my moving to California and reading all these New York periodicals I used to (not so) secretly avoid? Might I be a tad homesick?

stuck in my head, so why not yours too? 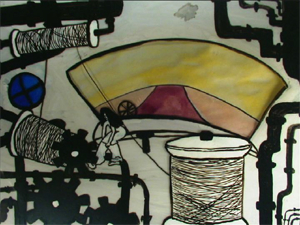 Its been nearly a month since my last post, and not without reason. Nearly all of my time has gone into two semester-long projects, a 16mm documentary film on the Salvation Army in Central Square and a hand-drawn cell animation, both of which will be screened Friday.

Friday 11:30am-3pm
Animation Party and Screening (bring friends for food + animation)
11:30am-1pm – Thai food on the first floor of the Carpenter Center
1pm-3pm – all animation from the spring semester classes will be screened

Friday 7pm-10:30pm
Screening of intermediate and thesis film, video, animation projects in the large theater in the basement of the Carpenter Center

Only my animation will be screened in the afternoon screening, while both of my projects will be shown in the first half of the evening program. The evening program is supposedly ticketed, but if you arrive on time you will probably get a seat even without one. Or let me know and I can try to get you a ticket.

Hope to see you there!