Dear Readers of My Blog (if any of you even exist, that is),

I’m looking for some company in reading some books about economics and participating in an email discussion about the current state of the global economy. I’ve been having lots of discussions about this topic lately, some wonderfully cathartic and educational, others horribly depressing, and more still immensely frustrating. The root of this frustration is more often a lack of shared vocabulary and historical understanding than it is a lack of shared values, though in few subjects are the two so dramatically intertwined as in economics. Suffice it to say, I’ve found the most fruitful conversations to be those in which the participants have read at least some of the same books or articles, even if they vehemently disagree on what they mean.

In a somewhat blind-leading-the-blind experiment, I’ve compiled a list of ten books that might form an initial common ground. Recommendations for this list come from (hopefully less blind) friends, family members, professors, and the books themselves. It is not intended to be a comprehensive overview of a discipline or in any way definitive. I just tried to pick texts which seemed to be in dialogue with each other, and have something valuable to say. Some I’ve read cover to cover, others merely selections, and a couple I’m still waiting to stumble upon in a good used book store. They are listed in chronological order, but I do not propose we read them in that order, or that to join the list you must commit to reading all in their entirety. Instead, the only requirement is that you obtain a few and read them at your leisure. And the list itself? Questions, rants, relevant links, suggested readings, selected passages, apt quotations, critiques: really, whatever the participants desire. 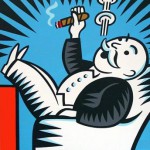 Some ground rules: The list will be hosted either on rrrojer.net or some more convenient non-Google service. The archives will be private but as with all email, assume you are speaking in a public forum. I will take the role of benevolent dictator/curator when it comes to membership, at least for the time being. Wit and humility encouraged; good natured and pointed name calling acceptable; outright hostility and disrespect less so (think Taibi not Limbaugh). The list is meant to be mixed company, meaning people who have studied economics and people who have not (I certainly fall into the latter category), so minimal jargon please. Knowing my peers this will probably have a lefty bent, but free-market fundies most welcome, especially if you turn a good phrase, as well as the unaffiliated. Though many of us are funemployed and have lots of time on our hands, let’s aim for quality over quantity – count to ten before you send kinda deal – so that busy students and professionals are also welcome. I’m hoping for low-volume high-density, but if it becomes too high traffic for your tastes, you can always unsubscribe. I will ban those deemed abusive.

Interested? Send me an email at rebecca@(this site) with a little explanation of why you want in or what book I’ve most egregiously left off the list. If I get a reasonable quorum I’ll set up a list and send you an invite.

Yours in curiosity,
Rebecca

2 thoughts on “Seeking: a small group of companions to form an email discussion list about the economy.”