“This series is about how those in power have used Freud’s theories to try and control the angerous crowd in an age of mass democracy.” – Adam Curtis

For anyone interested in why our culture is as it is today, I strongly urge you to watch The Century of the Self, an incredible documentary/film essay by Adam Curtis. It traces the rise of consumerism through the lens of PR and psychoanalysis. 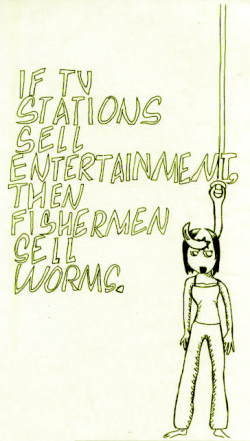 Rather than just a catalog of how our society is broken, The Century of the Self documents how specific people, in particular “father of PR” Edward Bernays, made deliberate and calculated efforts to get us here. At least according to this film, consumer culture was not entirely a happy accident; our corporate forefathers were quite aware of what they were doing, with the explicit intention of “controlling people through their subconscious desires.”

I generally avoid documentaries because I hate that feeling of despair and disgust as I sit helplessly outraged in front of the screen, watching the credits roll. Century of the Self certainly invokes such emotions. But the helplessness is overshadowed by a sort of internal mental churning, as my mind picks apart its psyche. A potently interactive viewing experience, the film forces one to question their own values. It outlines the trajectory of ideas such as “individualism” and “self expression” in our society, documenting their promotion and exploring their broader implications. Afterwards, one cannot help but attempt to articulate their own fuzzy but ingrained values, and to ask who put them there, and if they belong.

Episode 1: Happiness Machines
Episode 2. The Engineering of Consent
Episode 3: There is a Policeman Inside All Our Heads: He Must Be Destroyed
Episode 4: Eight People Sipping Wine in Kettering

One thought on “Century of the Self”