This is potentially good news: “Freelancers CO-OP given green light from N.J.”

How CO-OPs will work:

I’ve not been following the minutiae of Obamacare implementation well enough to know if this something to be optimistic about, but it sounds good on the surface. The bigger picture, less so. The state marketplaces appear to be experiencing moderate to severe bungling getting launched (except for maybe Oregon, who even budgeted for hipster troubadours?). This is an issue where I’m really more concerned as a consumer than as a citizen. Once the public option was off the table (never mind the fact that “health care reform” is discussed separately from the farm bill), it was clear we’d be getting screwed. I don’t have the bandwidth to ponder whether the screwing is more or less severe than what we’d have without Obamacare. Certainly it bought already privileged kids like myself a couple years of cushion by being able to stay on our parents insurance till our 26th. But my time is just about up …

Shitty summer for music in NJ! First Maxwells, now this.

You Are God by the intrepid Ian Midgley, my documentor-mentor at Open Source Ecology.

Deleveling the System by CHS-alum Cris Thorne, who is asking the questions that need asking. 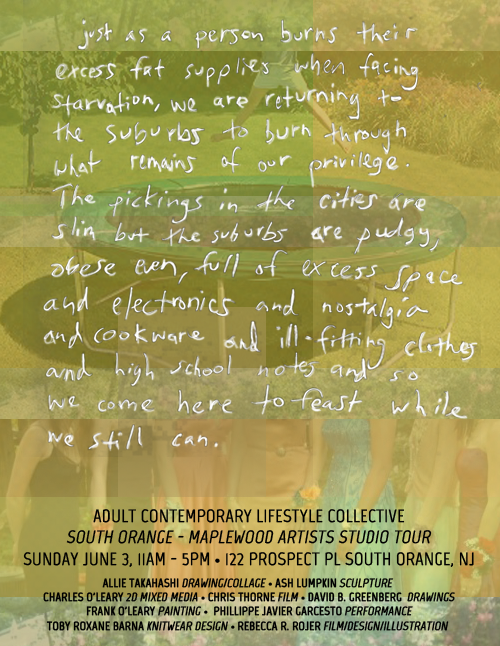 I’ll be showing some work tomorrow as part of the Adult Contemporary Lifestyle Collective at the Maplewood-South Orange Studio Tour. Swing by if you’re in town, have some refreshments, and check out a range of work by young artists raised in the Jersey suburbs who have either returned or never left.

[For context, check out my last blog post on the issue; also Cris Thorne‘s excellent documentary-in-progress De-Leveling the System]

10:03 PM: BOE member Gleason uses USA’s low PISA scores to defend leveled instruction; Finland scores highest in world & is committed to edu equality
[see: “What Americans Keep Ignoring About Finland’s School Success” and “How, and How Not, to Improve the Schools“]

10:15 PM: Many community members speaking against proposal including real estate agent & board of trustees member. #movetomillburn

10:24 PM: Both sides of this agree can agree on one thing: 2 min is not enough for public comment.

10:39 PM: Gleason trying to table proposal until there is a gifted and talented program; Daugherty disagrees, “don’t let perfect be enemy of good.”

[As my friend Dan (who also stuck it out for the meeting) put it, now time for all the work!]

Context: The Maplewood-South Orange School District, which I attended my entire public school career, is in the process of de-leveling the middle school. The district belongs to a community with many wonderful and unique characteristics: suburban, easy public access to NYC, artistically vibrant, and both racially and economically diverse. But the leveling system reveals an uglier side, as the school is blatantly segregated along racial (and socio-economic) lines.

You can read the district’s proposal here. A paper profiling three case studies of successful elimination of “curricular stratification” can be found here. Its focus is on how to de-level, but the endnotes contain an overview of the literature on why, with two decades of papers discussing the benefits of heterogeneous grouping. Our district is in communication with one of the district’s profiled, and seems to be following the steps outlined in the paper.

Finally, I was inspired to prepare these remarks after attending a discussion of alumni last week. It was a powerful post-mortem on our public school experiences. Hearing first-hand the vastly different experience some of my peers had in the very same schools has motivated me to get involved in this issue (again). The discussion was hosted by a filmmaker and fellow district alumnus Cris Thorne, who is working on a documentary called Deleveling the System. Excerpts of the discussion are online here and here. Additionally, I highly recommend Cris’s earlier documentary (produced as a high school student!), One School, for more background.

Finally, I should note that I was unable to read the complete transcript, because I had prepared for the standard 3 minutes of public comment and found out upon arrival that we were restricted to two minutes.

As a k-12 alumnus of this district, it is clear to me that the leveling system is not colorblind. In both the classrooms and the hallways, white students are consistently given the benefit of the doubt, while black students are assumed to be trouble-makers and low achievers. Students enter school with different degrees of preparedness, but the leveling system calcifies these differences into inequalities.

Worse, the leveling system turns prejudice into self-fulfilling prophecy. Low expectations correlate to low performance. For example, women perform worse on math exams after being told there is a genetic difference in math ability between the sexes.

There is clearly a place for grouping students by skill-level and motivation. But it is not always beneficial, even for “top” students. This is especially true of the turbulent and vicious middle-school years, where academic success is better predicted by behavior and obedience than by aptitude.

There are many styles of learning – fast, slow, deep, shallow, literal, abstract, disciplined, intuitive – yet we conceive of “high” and “low” achievers through standardized tests that are valued precisely because they simplify everyone onto a single metric. When testing becomes the end game of education, we all suffer. Excessive reliance on testing dehumanizes students and ultimately sabotages their education. Students who feel valued and respected are more apt to learn. The infuriating paradox in our district is that top-level classes are discussion based, encouraging of critical thinking and debate, while lower-level classes too often focus exclusively on test prep.

Education is about empathy, respect, creativity, and citizenship as much as it is about literacy and arithmetic. These values reenforce each other. Knowledge is power, and schools should empower students. Let’s teach compound interest alongside the history of redlining and predatory lending. Education is about life, not the GEPA.

There is much to be gained by heterogenous classes. One of the best ways to learn something is to teach it to a peer. And one of the best ways to be challenged, is to be confronted by someone who’s experiences and values are different from your own. That is what I most cherish from my education in this district. And for that, I really have to thank a group of my classmates, some of whom who are here tonight, for literally stopping classes my senior year to create a conversation among students in different levels.

Lets not forget, we’re all in this together. Today’s students are tomorrow’s voters, workers, mortgage-signers, taxpayers, parents, neighbors. Your children’s lives are affected not just by their own education, but by the education of everyone who participates in this society. To fret about the rigor of your special snowflake’s 6th grade social studies curriculum in light of massive, structural inequality is short-sighted and just plain wrong.

There is a wide-spread assumption that integrating classes will destroy our education system and wipe out our property values. Students can feel this very early on, and it is exactly this kind of attitude that perpetuates inequality. The best way to lift your property values is to do what’s right: work towards a system that benefits all students instead of only half. Lets reject the politics of fear, and instead move forward with empathy, creativity, and determination.

Lots of screenings coming up! 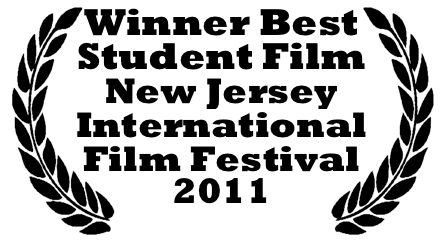 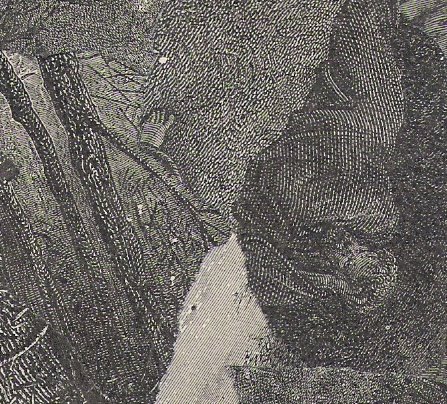 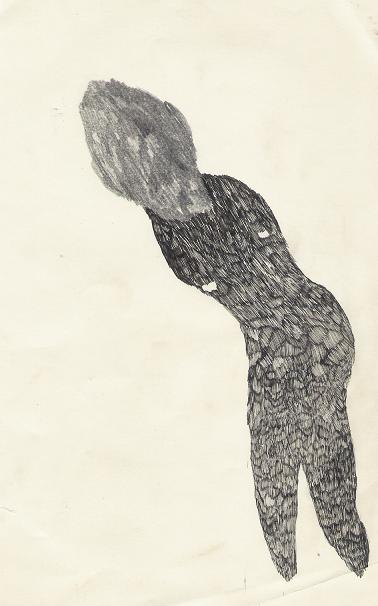