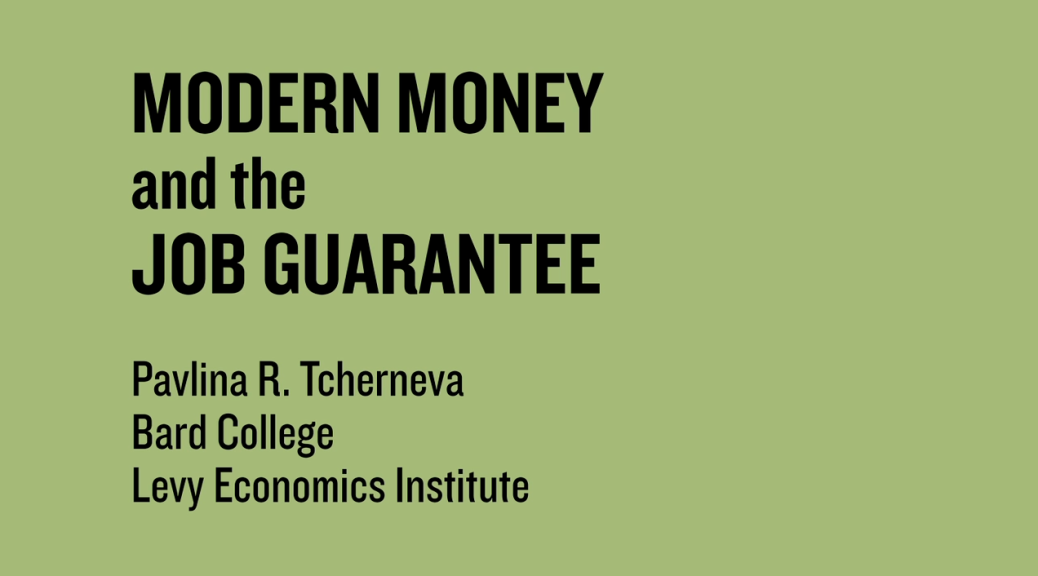 END_OF_DOCUMENT_TOKEN_TO_BE_REPLACED

Video I shot in 2011 of a lecture by Chris Seefer, an attorney at Robbins Geller Rudman & Dowd LLP — the law firm responsible for collecting the “mountain of evidence” of a massive ratings agencies scandal, as documented in Matt Taibbi’s brutal article The Last Mystery of the Financial Crisis.

“NSA whistleblower Edward Snowden: ‘I don’t want to live in a society …”

I was surprised that the existence/extent of our surveillance state was a surprise. Didn’t everybody know that? But the way the Guardian/Greenwald have played this so far is wonderful. The prosecution of whistleblowers is in many ways a much greater threat to our freedom than the spying. It seems completely inescapable that private data will be collected by both corporations and governments so long as the server space & energy exists to do so cheaply. But it’s what’s done with the data that’s scary, especially the lack of consequences for abusers of data. Whistleblowers are a crucial line of defense against abuse. This is true not just of surveillance but also financial & environmental regulation, for example. Consistently we’ve been prosecuting the whistleblowers instead of the criminals, accelerating the cycle of corruption and decay in government and society.

For Edward Snowden to publicly reveal himself at the height of media attention on the story, is a masterful shift of the story away from “privacy” and towards “importance & vulnerability of the little guy who speaks out against the system.” Whereas police brutality was arguably a distraction from Occupy’s message of income inequality, I hope whistleblower prosecution usurps the surveillance debate. Which isn’t to say that surveillance isn’t a huge issue. It deserves the spotlight, or even better, full sun. But we can’t make any traction on that issue, or financial crimes, or unsafe power plants, etc., if we keep ignoring & imprisoning whistleblowers.

In this video Snowden is a perfectly-cast hero for the whistleblower plight. If a more confident America in 1964 got Mario Savio speaking truth to power, then for 2013, with our “rockstars” being Facebook developers (or some such nonsense), Snowden is perfect: white, male, nerdy, calm, non-threatening, attractive enough to look good on camera, “self-made” high school drop out who went on to a lucrative upper-middle class career thanks to his skills. Basically, how the archetypal Redditor imagines himself to be.

So we finally have a narrative to make rally around whistleblower protection. Exquisitely played PR, Mr. Greenwald. What Cindy Sheehan was to the anti-war movement, perhaps Edward Snowden will be to whistleblowers. Of course, that means the counter-PR will ferocious. So far Snowden appears to have more foresight than Manning and more humility than (and hopefully none of the rapiness of) Assange. So it remains to be seen how they’ll go about destroying him in the court of public opinion. I am relieved that he seems to have gone into this with his eyes open, fully aware of what he is sacrificing. He deserves our gratitude and admiration. The battle ahead will be nasty indeed. 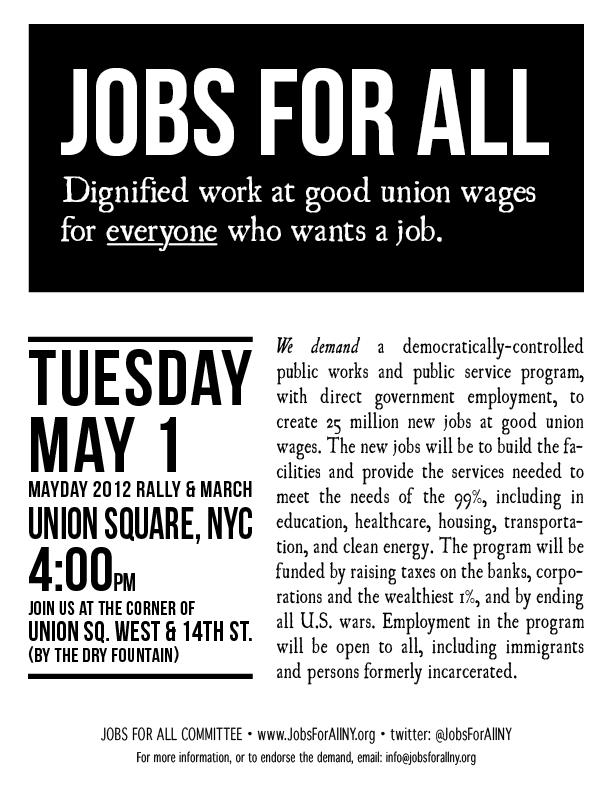 Join the Rally and March on May Day for JOBS FOR ALL!

Join a large, visible presence advocating job creation and an end to unemployment:

JOBS FOR ALL
Dignified work at good union wages for everyone who wants a job.

We demand a democratically-controlled public works and public service program, with direct government employment, to create 25 million new jobs at good union wages. The new jobs will be to build the facilities and provide the services needed to meet the needs of the 99%, including in education, healthcare, housing, transportation, and clean energy. The program will be funded by raising taxes on the banks, corporations and the wealthiest 1%, and by ending all U.S. wars. Employment in the program will be open to all, including immigrants and persons formerly incarcerated.

Last weekend I attended Left Forum and videoed a fantastic panel, The Struggle for Full Employment: Not a New Idea and Not a New Struggle, sponsored by the National Jobs for All Coalition.

The presentation explores New Deal job creation efforts and FDR’s Economic Bill of Rights that began with the right to a decent job. It discusses two major attempts to secure full employment, in the immediate post-World War II period and in the 1970s, the first ending in the defeat of full employment legislation and the second, in the failure to implement a watered-down full employment act. Full employment, the presentation shows, will take a fundamental break with neo-liberalism and a reorientation of power from big business and Wall Street to middle- and working-class people and will require the full-scale social movement that both earlier struggles lacked.

Chuck Bell: Vice Chair, National Jobs for All Coalition, co-author of “Shared Prosperity: The Drive For Decent Work” (2006). Twenty years of experience in consumer and health care advocacy, and community movements for jobs and economic justice.

Helen Ginsburg: Professor Emerita of Economics, Brooklyn College, CUNY., and co-founder of the National Jobs for All Coalition. Author of books and articles on employment policy and strategies.

Gertrude S. Goldberg: The New Deal and Social Welfare Professor of Social Policy Emerita, Adelphi University School of Social Work where she directed the Ph.D. program. Chair of the National Jobs for All Coalition. Co-chair of the Columbia Seminar on Full Employment, Social Welfare & Equity. Author/co-author and editor of six books and numerous book chapters and articles on social policy and employment.

Moderator: Sheila D. Collins, Professor of Political Science at William Paterson University and co-founder of the National Jobs for All Coalition.

I just donated $50 to Rocky Anderson’s presidential campaign. I’ve already come public about my support of Rocky and unwillingness to keep voting for Dems but I just wanted to share this email from the Rocky campaign, because it’s so damn refreshing to hear something like this from a politician:

Thank you for your donation to our campaign. With your help, we will lead the United States forward on a healthy, just, and sustainable path.

We do not accept more than a total of $100 from any person. We are making the choice to emphasize the need to end the corrupting influence of money over our political system. We will rely on grassroots organizing and democratized means of communication to overthrow the dictatorship of selfish narrow interests, which, with the collusion of the two dominant parties, have been undermining the public interest.

This campaign stands for:

An immediate end to the on-going wars;

Urgent international leadership by the U.S. to prevent the most catastrophic consequences of climate disruption;

Adequate revenues to balance the budget through fair taxation;

Treatment of substance abuse as a public health, rather than criminal justice, issue;

Control of the Federal Reserve by the Treasury Department and Congress;

A balanced budget (or a surplus) except in times of war or major recession;

An end to the legal concept of corporate “personhood;” a constitutional amendment to overrule Citizens United ;

An end to the corrupting impact of money in our electoral system;

Protection of U.S. jobs, through re-negotiation of trade agreements and jobs programs like WPA and CCC to improve our nation’s infrastructure and employ millions of Americans;

An end to the stranglehold on our government by the military-industrial complex.

United we can come together to put the public’s interest first. 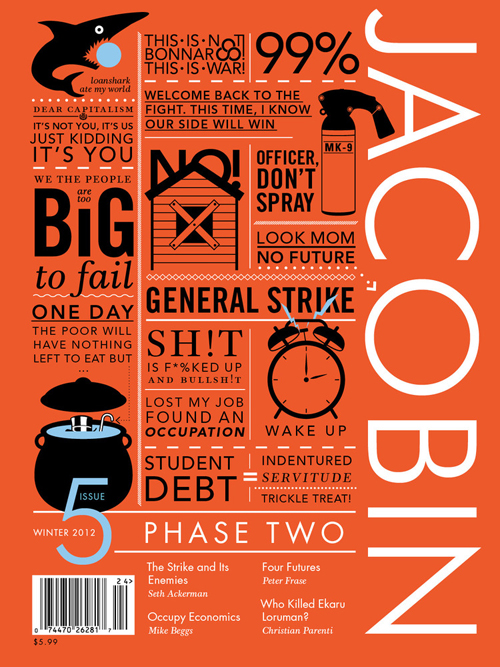 One of the interviews I shot in Kansas City last month at the Autopsy of a Financial Crisis conference at UMKC: